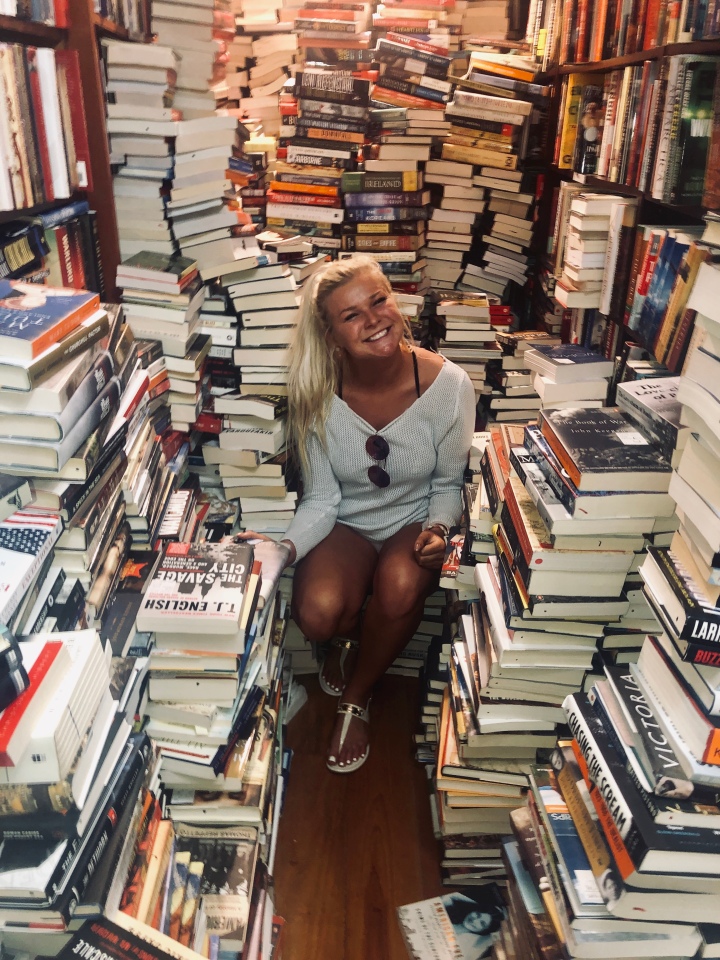 Listen to our Podcast!

Over the past month, Sofia and Ashley (your Travel Brats) have been compiling a list of all the best books and authors to share with the Travel Brats Tribe. We’ve asked friends, family, and our listeners for what books they love and why, so now we have a big list of some of the greatest novels of all time. We’ve got a little bit of everything from nonfiction to historical fiction to mystery to romance, so delve on into our comprehensive book recommendations.

This overview of the history of the West is exciting and beautifully written. Lewis and Clark, The Texas Revolution, California Gold Rush, wild San Francisco, Building the Trans-Continental Rail Road, over  the Sierras and across the plains which are  filled with Indians, one-armed John John Westly Powell leading the first expedition down the Colorado River through the Grand Canyon, John Coulter discovering  Yellowstone and the Tetons( in mid-winter), all incredible, separate stories that, in combination,  depict what the West was like and why it is still so much a part of the American spirit.

You may be wondering how someone could write anything new about WWII. But Dr.Hanson does. He has a commanding understanding of the grand strategy and tactics of each combatant nation, their strengths, and weaknesses, economically and militarily, who had the best weapons, how geography affected battles, and much more. It is just a very creative explanation of  the overall inexorability of the of the Allied victory (as long as they didn’t make too many blunders). If you would like a shorter and lighter example of what an inspiring writer Dr.Hanson is, try The Savior Generals, which shows how important leadership can be(examples in the book are: William Tecumseh Sherman, Mathew Ridgeway, and David Petraeus).

This is about Abraham Lincoln and the brilliant men he chose for his cabinet, nearly all of whom wanted his job. There good mini-biographies of each cabinet member and his relationship with Lincoln. The most revealing is the relation with William Seward, who, brilliant in his own right, initially was Lincoln’s biggest rival and most severe critic. But Seward is smart enough to quickly realize that   Lincoln is in a class of his own and is far and away from the best man for the difficult times ahead. How Seward then becomes Lincoln’s most trusted and valuable advisor one of the great stories in this masterpiece.

This is a compilation of short essays explaining, with humor, wit, and logic, how economics really works in our everyday lives. No graphs or equations,but clear lessons. Dr. Sowell has written many other engaging and brilliant books, all recommended..

This is the story of the early days of aviation from before WWI through WWII as seen and lived by three remarkable aviation pioneers. Eddie Rickenbacker was a mechanic then race car driver ,who became America’s WWI ace fighter pilot. After the war , he founded and was president of Eastern Airlines, among other things. Jimmy Doolittle not only led the early air raid on Tokyo in WWII, he was a  pioneer in developing and flight testing aviation instrumentation. Charles Lindberg is known for being the first person to solo the Atlantic, but he also flew 40 combat missions as a civilian in WWII and greatly improved fighter plane engine performance. This is great adventure.

This is the first in a series of mysteries about game warden, Joe Pickett as he solves mysteries in the rugged mountains of Wyoming. Well plotted stories with engaging character development and great descriptions of the Wyoming wilderness.

This is the first in a series about police detective Harry Bosch. These mysteries are filled with rich, detailed descriptions of the grittier sides of LA, along with police department political intrigue and multiple plots. The have a compelling feeling of authenticity. The author was a police reporter before he started writing fiction.

He has written so many great books, that it is difficult to pick just one. Most are about the South Carolina coastal region, and all are beautifully written with vivid description of this amazing area. South of Brond is his last and my favorite by an eyelash.

Dr. Asimov is one of the giants of the Golden Age of science fiction. This book is perhaps even more timely today ( about free clean energy) than when it was published in 1972. It consists of three stories,one the near the future on earth, one a beautifully described alternative universe, and lastly, a very plausible story on our moon after it is colonized. All stories seem totally independent until the end. This is engaging and imaginative writing and would be a great introduction to science fiction.

This really is a fun and exciting read with sweeping grandeur and lots of subplots. Not at all dull like most books that are” classics”. OK it is long.-even better. A miniseries in one volume. Think of it as Downton Abbey in Russia,in the middle of a war. It will not take you 5 years to read. Promise!

This is a story of the relationship between a widower and a widow  who are in their 70’s.  They are acquainted as neighbors in a small rural town in eastern Colorado. This is a bittersweet tale of two lonely people who get to know each other better; sharing thoughts and feelings during the night which they agree can be so terribly lonely.  A beautiful story of second chances unfolds in this author’s last book before his death.

This is a story narrated by a 7-year old farm boy(Luke) who lives in Arkansas with his parents & grandparents in a house that has never been painted. The family has a hard life picking cotton on an 80 acre farm that they rent. They have to hire Mexican  immigrants and hill people from the Ozarks to help them at harvest time. This book is referred to as a  “real slice of Americana” with vivid descriptions of life in the rural South in the 1950’s.   Young Luke has a dream of being a Major League baseball player and looks forward to listening to games on the radio.  While this novel portrays some of the mundane experiences of his life, it also includes some harsh realities and a loss of innocence that he experiences.  The author usually writes legal thrillers, none of which I read.  But I found John Grisham to be a superb storyteller.  And I found this book to be a moving story of a portion of a  young  boy’s life.

This is a mesmerizing story of the richness of the North Carolina coastal marshlands and the disturbing story of a young woman who is abandoned by her parents and older siblings as a young child.  As the story unfolds we learn how she adapts and survives in the swamps with very little help from the outside world. And it also includes a love story and a murder-mystery tale.  So this book has a little bit of everything.  This book is so beautifully written and contains poetry and vivid descriptions of the Marsh where the entire story takes place.

4.  Just for good measure, I have to mention 3 other books by the author of my #1 selection–Kent Haruf.  They are:  Plainsong,  Where You Once Belonged  and  The Tie That Binds.  All three of these are compelling and compassionate novels set in the High Plains of Colorado. The author is an amazing storyteller who captures the everyday lives of various people in a small rural community.

19th century Gothic Romance novel that follows the hard life of Jane Eyre in her journey to meeting and falling in love with her employer, Mr. Rochester, but she runs into trouble when she realizes that Rochester is keeping his first wife hostage in their attic.

The Monk by Matthew Gregory Lewis

18th century Gothic Horror novel that follows much of the plot of a modern soap opera. This novel details the depraved nature of a monk who sells his soul to his cross-dressing friend who turns out to be a woman, who then turns out to be a demon sent from hell to tempt him. Through his deal with the demon he tries to fulfill his sexual desires toward a young woman in his village who ends up being his long lost sister. Churches burn, people are poisoned, raped, and trampled to death. Pretty saucy for the 1700’s.

set in a dystopian, futuristic society (likely America) where reading is outlawed, anyone who owns a book is arrested, and the book is promptly burned. The citizens are held captive by cool technology and entertainment so they do not realize that the government is completely taking over their minds and stifling knowledge.

Waiting for the Barbarians by J.M. Coetzee

set in an unnamed, futuristic society where members of “the Empire” are waiting to be attacked by “the Barbarians”. The main character ends up bringing a Barbarian girl to his home after she is captured and tortured by the Empire. There are lots of really weird, sexual bathing scenes, but ultimately, this novel is a commentary on racial injustice in South African apartheid.

Pride and Prejudice by Jane Austen

such a popular story, but many people have only seen the movie. If you read the book, you get to see the personalities of Darcy and Elizabeth so much clearer which makes their relationship so fun.

this is a prequel to Jane Eyre that shows the origin story of Bertha, Rochester’s first wife and how she came to be “the mad-woman in the attic.” It made me cry.

the 19th century Gothic/Horror story that many people know so well but have never actually read. Follows a team of vampire hunters led by a Dutch professor after Jonathan iis kidnapped and held hostage by Count Dracula. The team must race against time before Mina is forever un-dead and made to be Dracula’s wife. Super creepy, and uncomfortably sexual, lots of blood, kinda saucy.

another 19th century Gothic Romance novel with a much more sinister and creepy love interest. Lots of Ghosts, some weird love triangles, and lots of useless violence. Rad.

A Tale of Two Cities by Charles Dickens

arguably the best Dickens book. It’s about two men, one British and one French, fighting over the same girl during the French Revolution.

Literally anything by Agatha Christie— Christie is known as the “Queen of Murder” and she is the most widely published author of all time. She wrote 80 novels and short story collections and 19 plays. Here are my favorite titles of her work and plays:

Thank you Sofia’s grandpa, Shelia, Sebastian, Caleigh, Jenny, Rachael, Hannah, and all of the wonderful people who made suggestions and recommendations! We love you! Enjoy and read on.